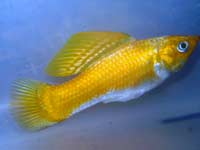 One of the oldest-running conventional wisdoms in this hobby is the necessity of adding salt to molly tanks. As the theory goes, mollies experience the shimmies without brackish water, and eventually succumb to poor health. The basis for this seemingly age-old wisdom comes from various fishkeepers, as well as the brackish or marine conditions that Poecilia lattipina (the ancestor of all cultivated Mollys), often frequents. The experience of expert molly keepers, collectors, and fish farmers, however, is just the opposite: salt is NOT a requirement for healthy mollies. So whos right?

One of the problems with most of the hobby literature advocating the use of salt is that folks who are not specialized molly breeders often write them. One book I read even advises molly breeders not to bother with any special feeding for the fry, as youll have more mollies than you need anyway! A good source for authoritative information are the folks at the livebearer hobby organizations, molly collectors, as well as the Florida fish farmers who supply these animals. Heres what they tell us in summary

Not all Mollies are the same. Pet shop and introduced mollies are usually aquarium strains which are hybrids from Poecilia latipinna, P. velifera, and species from the sphenops complex.

Mollies are Adaptable. Aquarium mollies are highly adaptable fish that have been introduced all over the world in a variety of fresh and marine habitats. Floridas race of P. latipinna is the only Molly species that commonly inhabits "salt-water" and one of the few (along with a race of P. velifera) to inhabit "brackish" habitats. This probably explains why aquarium strains of mollies do not have a salinity mortality threshold like other livebearers (most aquarium strains have P. latipinna and/or velifera in their ancestry). Ive collected P. latipinna in Key Largo, Florida right next to a Sea Anemone. But just a few miles away in the Everglades, fresh water becomes their biotope. In Shreveport, Louisiana Livebearers Journal Editor Bill Allen collects them in the rainwater-fed drainage ditches! Even the South American One-Spot Molly, P. vivapara, consists of races that exist from both soft rainforests and coastal lagoons. All these fish are breeding and thriving.

Most Mollys Never See Salt. Most if not all the Mollys that inhabit the streams and rivers of Central America will live out their lives without ever venturing into brackish water. Many of these are fish of the sphenops complex that include species now classified as Poecilia maylandi, butleri, and salvatoris among others. Aquarium strains with short fins or smaller dorsals have these animals in their ancestry. Their biotopes are often fast moving streams and rivers fed mainly by rainfall. These same fish can and do occasionally exist in brackish deltas and marshes, but that does not mean this should be considered the "type" environment for the species. When rains come heavy in that part of the world many fish are "flushed" out to sea. Those that manage to survive often will settle on the tranquil coastal areas, eventually working their way back up to rivers and streams by swimming near the shallow banks.

Maybe its the hardness not the salt. Sodium chloride (table salt, NaCl) is not the "salt" natural to most Molly habitats. Florida and Central Americas peninsula regions are composed mostly of limestone in many forms. Limestone is composed mainly of calcium carbonate (carbon-based skeletons of old coral seas). If I were to make an educated guess at what makes Florida fish farms such an ideal habitat for Mollys, I would say its the calcium hardness and high level of carbonates which buffers an alkaline pH (keeps it from shifting). Many municipal water supplies are hardened instead through bi-carbonates, which will raise the pH in the alkaline range to prevent pipe corrosion and lead seepage, but may not buffer enough for mollies and many other livebearers and not provide the calcium content. Hence, water hardness (mineral content) appears a bigger factor for Mollys than salt. For example, P. petenensis occurs at high elevations in a lake just outside Guatemala city. I doubt there is any "salt" (NaCl) at this elevation, but the substrate is volcanic in nature and full of minerals. The easiest way to add calcium hardness is to use crushed coral or shells as a substrate additive or in your filter. Even adding a few large seashells to your tank or filter should do the trick.

Water Changes Are Better Than Salt. The salt debate comes about when one deals with the less hardy and adaptable fancy livebearers, such as the Black Molly or Red Velvet Platy. These are genetically non-diverse varieties and thus prone to sickness, usually requiring higher temperatures and clean water (red velvet platies are another example). Here, salt acts as a tonic which make these fish more "forgiving" of the most common mistakes in fish husbandry - overcrowding and infrequent water changes. As Molly legend Dr. Joanne Norton (who was responsible for many of the varieties we now enjoy) advised nearly 30 years ago:

"...If water changes are large enough and frequent enough, and if all the water is well aerated and circulated, livebearers (all the species I have kept) do fine without salt added to the water. If these conditions are not met, or if the fish are too crowded, then troubles appear. Thus, salt enables you to continue one or more poor tank management practices that are still harmful even though the fish may survive them in the presence of salt

U.K. Livebearer expert Derek Lambert concurs with this general idea, as do many in the American Livebearer Association. I admit I do use salt in some of my livebearer tanks, as my maintenance practices are far from ideal. But I always get a better response from my livebearers when I do a water change and use crushed coral instead of adding salt. For sick fish or ailing fish, 1 teaspoon per gallon may be beneficial to relieve osmotic stress.

One of the benefits of not using salt is that you can keep a variety of plants in your tank. Live plants do a great job of maintaining water quality as they take up both carbon and nitrogenous wastes. Ive found a tank planted simply with Vallisneria spiralis will enable some fry to survive even the hungriest parents in the same tank. If you still prefer using salt for mollies, try Hornwort and Java Fern, which can be maintained although not optimally in brackish conditions.

So in summary, keep the water calcium hard if you plan on keeping aquarium strains Mollys (or any other livebearer). Temperature near 80F is recommended for the fancy hybrid strains. Maintain weekly water changes of 30% and give them some space. Id put no more than a trio of the larger fancy strains in a 10-gallon tank to bring them to full beauty. A 20 long is even better. There are some true brackish livebearers out there, such as the famed Peacock Molly, Poecilia picta, so consult your books (or me) whenever you acquire a new species.